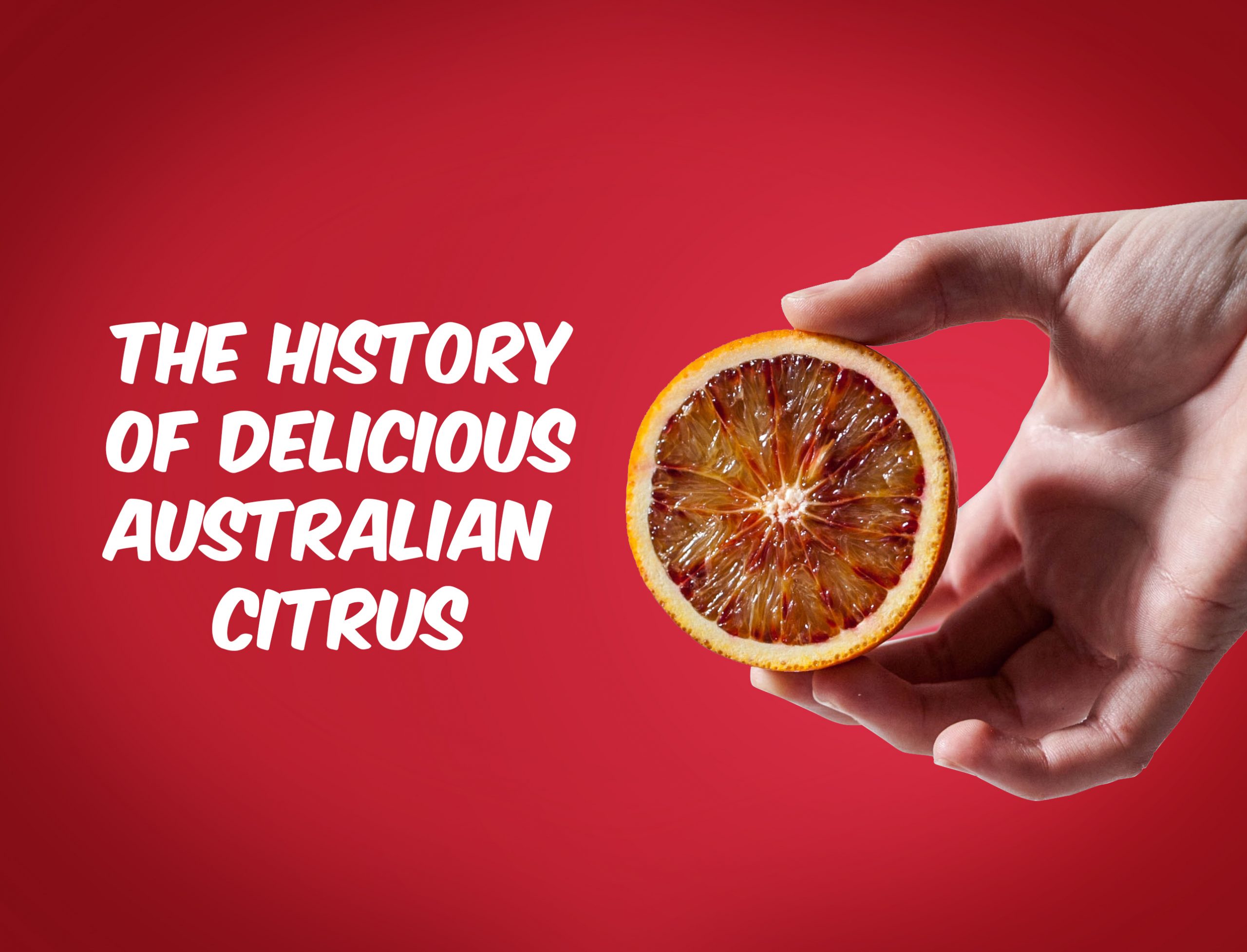 Sun, surf, men with large knives, cute animals with pouches that may or may not drop out of trees and more things that can kill you than you can shake a didjeridu at. Most people would be familiar with these stereotypes, and some of them may even be true.

Less pervasive in popular culture is Australia’s standing as one of the world’s most respected citrus producers. When you think citrus, your mind may immediately jet off to the sultry climes of Florida, Spain, Brazil or other exotic shores. However, Australia undoubtedly pulls its weight on the global stage. While not top of the list in terms of production – Australia sits at number twenty-nine on that score – when it comes to exporting, Australia ranks 6th in the world. More importantly, it’s the superb quality of the fruit grown Downunder that thrusts it into the limelight (pun only slightly intended).

So, how did citrus make its way to Australia and what makes it so delicious? Let’s find out:

The History of Citrus in Australia

You’ll probably be surprised to learn that citrus fruit has grown in Australia for WAY longer than you may have imagined. Genomic analyses have shown that native varieties first appeared in our Wide Brown Land during the Pliocene Epoch – That’s about 4 million years ago, folks! At the time, the landscape was traversed by now extinct, Megafauna. That’s right; our very first citrus fruits shared digs with giant 3-meter wombats, gargantuan kangaroos and a 10-meter long python (we told you there was lots of stuff that could kill you here!).

How did they get here? Well, we weren’t around at the time, so we can’t be sure. However, the prevailing theories are that seeds floated across the sea from Southeast Asia or stowed away in birds’ bellies to be deposited somewhere in the extreme North West. Our puckery pioneers since evolved into six delicate and quite delicious species of round limes, desert limes and finger limes.

Actually, Australia’s indigenous peoples did. They’ve been enjoying the tangy, juicy flesh for many millennia before Europeans arrived on the scene. When the First Fleet arrived in 1787, they knew they were coming to a wild and unknown environment. Self-sufficiency was the name of the game, so they brought with them many plants and seeds in an effort to establish sustainable horticulture. During the long, arduous journey from England, the fleet stopped over in Brazil. Given that the overwhelming majority of passengers were convicts, it’s safe to assume that this stopover was not to enjoy Mardi Gras. One thing we are sure of, however, is that they managed to pick up lemons, limes, oranges, grapefruits and mandarins. These early botanical settlers found the conditions very much to their liking. Before long, thriving citrus orchards were growing in and around what is now Sydney. These trees formed the basis for an industry that now makes up 42% of Australia’s horticultural exports.

Why is Australian Citrus Such High Quality?

Citrus prefers soil that is neither too acidic nor too alkaline. Australia’s ancient soil is, for the most part, just slightly more acidic than is considered ideal for citrus growth. However, the weather in Australia’s South-East more than makes up for it. The fabled, dry, sun-drenched summers, coupled with cool, wet winters are the perfect recipe for sweet, juicy, delicious fruit.

This is no more true than in the fertile regions along the mighty Murray and Murrumbidgee Rivers. Situated at the foot of the Australian Alps, the combination of mountain runoff and river waters provide ample moisture to complement the golden sunshine and blazing summer heat. This area incorporates the Riverina, Sunraysia and Riverland regions, which cover almost 20,000 hectares and collectively account for 90% of domestic citrus production. All our spectacular Dracula Citrus™ fruit is grown in these parts of the country, which goes a long way to explaining why it is so devilishly delicious.

The other major contributing factor is our people. Australia is widely recognised as a world leader in horticultural sciences. This wealth of human and intellectual capital is the secret ingredient that makes Aussie citrus prized around the world. Growing citrus is no simple undertaking. Selecting the finest rootstock, managing soil, quality control testing and irrigation methods are just some of the factors that contribute to healthy trees and superior quality fruit. Every piece of Aussie citrus is infused with our growers’ commitment to quality, integrity and world’s best practice. The sweet, juicy goodness in every bite is a testament to this fact.

What Varieties of Citrus Are Grown in Australia?

The simple answer to this one is – all of them. Having said that, the Aussie crop is dominated by oranges, which average around 80% of production. Mandarins are a distant second with somewhere in the vicinity of 10-12%, followed by lemons, limes, grapefruit and an assortment of specialised varieties.

Unsurprisingly, the orange category is dominated by Navels and Valencias. However, Cara Cara and Blood Oranges are rapidly growing in popularity and volume.

Interestingly, The Land Down Under is also making a name for itself as a producer of specialty citrus varieties. Strategic grafting has produced numerous interesting new kinds of fruits such as Yuzu, Dekopon, Tangelos, and Clementines. Sometimes referred to as “Frankenfruit”, these hybrids grow beautifully in Australian conditions, filling a growing niche in the domestic and export markets.

Living upside down on the other side of the planet can have its advantages. The alternate growing periods mean that when citrus is out of season in the Northern Hemisphere, we’re just getting started down here. This ensures that consumers in North America, Europe and Asia have access to outstanding quality fruit even in the Autumn and Winter seasons. For example, our superb Dracula Blood Oranges are ready to pick in August, which means that they hit US produce aisles right in time for Halloween. Sweet, juicy and blood-curdlingly delicious, they make the perfect healthy alternative Halloween snack.

With so much going for it, is it any wonder that Australian Citrus is taking the world by storm? Whether you’re in Australia or overseas, you can savour the superior flavour and texture of Dracula Citrus™ wherever quality Aussie citrus is sold. This aesthetically striking and gloriously delicious dessert will thrill your tastebuds and bedazzle your family or guests. Quench your thirst with our simply sweet home-made lemonade. Perfect over crushed ice on a hot Summer day. A blood orange spin on the ‘chocy mandarin madness’. If you like a little more bite with your chocolate, these are for you.

Dracula’s plans for world domination are proceeding according to plan. Numerous retail outlets and their customers around the world adore the fun, convenience and Aussie sun-ripened flavor of Dracula Citrus.

Complete the form below to learn more about what’s happening in the world of Dracula Citrus!